* The gas molecules in the above simulation are all of the same type, and the color of the molecules is for identification purposes only.

‘Kinetic Theory of Gases’ is a hypothesis to explain the motion of gas molecules. To explain this hypothesis, we assume an ideal gas that satisfies the following assumptions:

Assuming a box of length \(L\) with a wall cross-sectional area \(A\) contains a gas particle of mass \(m\). 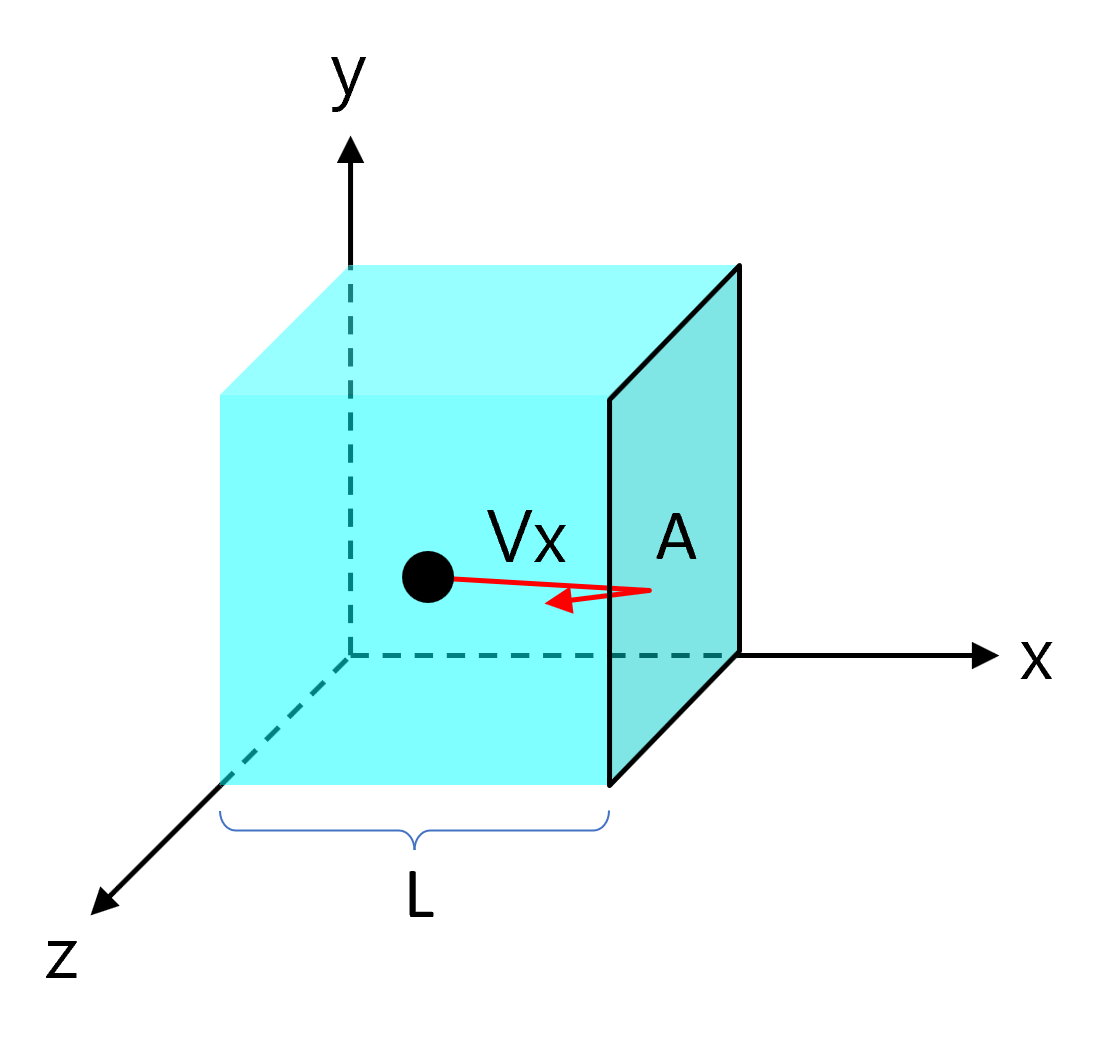 Gas particles collide with the wall entirely elastically and move linearly with random direction in the \(x\), \(y\), and \(z\) axes.
Consider the case where a gas particle collides with the \(A\) side with velocity \(v_x\). The movement that applies an impact to the wall \(A\) is only the \(x\) axis component, so for the sake of convenience, the \(y\) axis and \(z\) axis are not considered for the time being.
A gas-particle makes a perfectly elastic collision with the wall \(A\). The momentum of the particle before and after the collision changes as follows:

The impact force \(F\) on the wall \(A\) per second can be obtained by dividing the momentum change by time.

If there are two or more gas molecules, the magnitude of the pressure \(P\) is as follows:

According to Pascal’s principle, the pressure of the gas is applied uniformly across all walls.
Thus, the pressure \(P\) obtained above is equally applied to the entire wall of the box, not just for wall \(A\).

Now, consider the direction of the \(y\) and \(z\) axes. The mean of the squared velocity of a gas particle (\(v_{rms}^{2}\)) can be expressed as the Pythagorean theorem.

Since the motion of the ideal gases molecule has the same degrees of freedom in all axes, it can be thought of as follows.

So, the pressure entire the box is as follows:

The above result should also agree with the ideal gas equation(\(PV=nRT\)).

As such, ‘root-mean-square velocity’ can be clearly defined as a function according to the type of molecule and temperature.

The ‘mean speed’ has a slightly smaller value than the ‘root-mean-square velocity.’
And, the mean speed does not maintain a constant value and changes little by little. The smaller the number of molecules, the greater the fluctuation.