The photoelectric effect is a phenomenon where electrons pop out when a light beam is incident on a metal surface.
Simply think, the energy of light is transformed into the form of electrical energy.
However, electrons will only be emitted when the light is incident on the metal at a certain frequency or higher. The minimum photon energy at which electrons can stick out is the 'work function'.
Usually, alkali metals such as sodium (Na) are often used in photoelectric effect experiments. This is because the work function of alkali metals is small, so it is easy to cause photoelectric effect even with low frequency visible light. 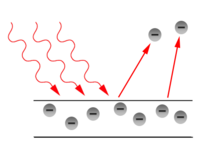 Energy of one photon

You can also use the energy size of a photon as :

λ(rambda) is the wavelength of light in meters

In addition, the metal surface itself may interfere with the emission of electrons. This energy is the 'work function'.Therefore, if the stopping voltage is not applied, the kinetic energy of the emitted electrons can be obtained as follows.

When stopping voltage is applied, the maximum kinetic energy of emitted electrons

When the stopping voltage is applied, the maximum kinetic energy Kmax of the emitted electron is calculated as follows.

In terms of the photoelectric effect, it is convenient to change the unit of energy to eV.1 eV is the amount of energy when one electron is accelerated at a potential of 1V.

This photoelectric effect becomes the basic concept of solar power generation. In other words, when light is emitted above a certain frequency, electrons pop out immediately (no delay in time).
If these electrons are allowed to run through electrical circuits, then solar power is generated.
Solar cells are semiconductors made from silicon (Si) in the sand. When sunlight shines on a solar cell, the electrons in it move and flow along the wires, and the flow of electrons creates electrical energy. 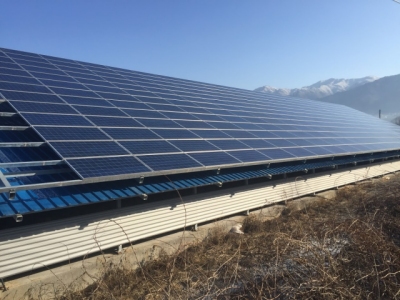 Solar cells are made by adding very small amounts of phosphorus and boron to each side of thin silicon plates, which are commonly used as semiconductors.
Most commercially available silicon solar cells can convert 15 to 25 percent of the energy contained in sunlight into electricity.
The output voltage of one solar panel is only about 0.6V. So we connect several plates together to increase the output voltage and current.