Twin paradox started as a contradiction in 'time delay' in Special relativity.
The Twin Paradox goes something like this: (Contents vary depending on the media.)

If twins met each other in 10 years, who would be older?

When introducing a Minkowski space, it is important to keep the following in mind:

If the spaceship only moves away

Consider the case where the spaceship does not come back but only moves away.
As mentioned earlier, observers observe objects around them based on their respective coordinate systems. 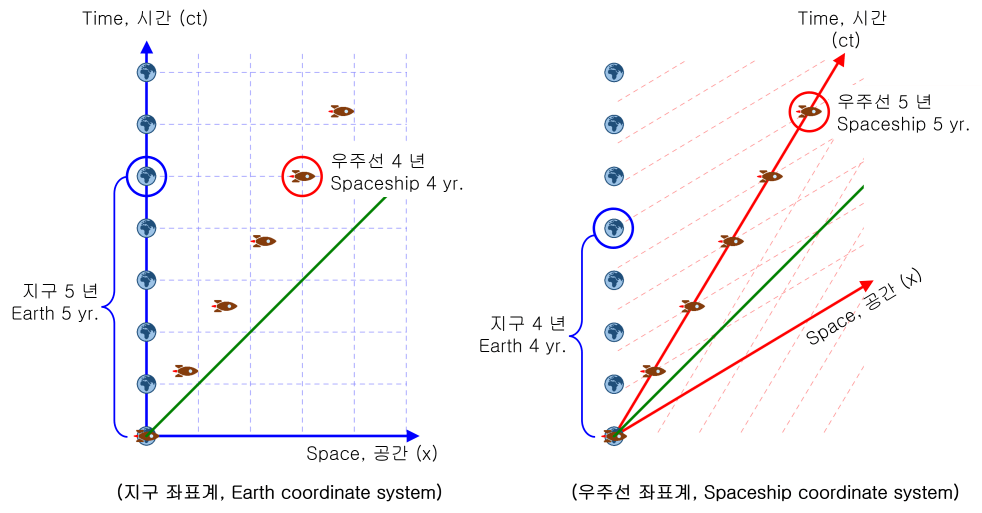 The figure above shows a spacecraft moving away from Earth at 0.6 times the speed of light. The two figures are the same motion; only the coordinate system is observed differently.
From the earthman's point of view, the spacecraft's time passes slowly.
However, from the astronaut's point of view, Earth's time flows slowly.
This is because each observes the other through their coordinate system.

If the spacecraft changes direction

To return to Earth, the spaceship must change direction, and deceleration and acceleration occur in the process of changing direction. In this process, the Minkowski spacetime axis is transformed as follows. (Red → Orange)

The dotted line is the x-axis of the spacecraft's coordinate system. (Same as the spaceship's time zone)
From an astronaut's point of view, only the speed seems to have changed, but in reality, because the axis of the coordinate system changes, time jumps on Earth by several years.
In fact, in the process of tremendous deceleration and acceleration, the spaceship must experience a significant gravitational acceleration as if it were near a black hole. And, during this time, a lot of time outside the spaceship passes.