In direct current (DC), current flows in only one direction of a conductor. For example, since a battery's terminals always maintain a constant pole, current flows in only one direction in an electrical circuit. Most of the electrons inside the wires are driven by disorderly movements, and they gradually move toward the (+) pole of the battery due to the voltage applied to the circuit. Batteries that generate DC voltage or parts whose operation depends on the circuit's polarity have their own polarity markings.

The alternating current (AC) current only vibrates without a certain direction. This is because the voltage in the circuit changes periodically.
Since the household power source is AC, there is no polarity mark where the plug is inserted. The frequency of AC power in Korea is 60Hz. In other words, the voltage reverses twice and returns to its original state, repeating 60 times per second. Electronic products that use AC power do not need polarity marks, so you don't have to worry about the (+) and (-) polarities when plugging in.

The reason why the electric circuit using the battery is direct current can be found by examining the structure of the battery. Chemical cells are designed to flow electrons by using the chemical reaction of substances continuously.
In the center of the 1.5V manganese battery, the carbon rod forms the (+) pole, and the zinc plate forms the (-) pole on the outside. Dilute ammonium chloride is contained in a paste between the carbon rod and the zinc plate. 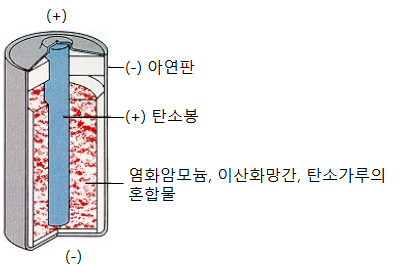 The structure of a commonly used manganese battery

When a voltage in a certain direction is applied like direct current, electrons can move in one direction, whereas in an AC circuit, electrons do not move. Electrons only vibrate back and forth.

A household electrical outlet is a connection that supplies electrons?

History of direct current and exchange

The concept of supplying electrical energy using alternating current was proposed by Tesla of the United States (1856-1943). Ironically, while Tesla was at Edison's direct current (DC) power plant, he developed alternating current (AC) current, but Edison wasn't interested in Tesla's AC power system. Eventually, Tesla quit that company and worked independently. Realizing the market potential of AC power, George Westinghouse purchased Tesla's patent right. Edison tried to stay at the DC but fell behind on AC power. Currently, all electricity in the world is mainly powered by Tesla's AC power.