1. Cylinder with monatomic gas
2. Piston that can move freely without friction
3. Free part for heating and cooling

The internal gas can expand and give some work(mechanical energy) to the outside. Conversely, it can be compressed from the outside.
The amount of work whenever gas expands is greater than compress. Therefore, A Carnot engine works well as a kind of engine.

The operating cycle of the Carnot engine 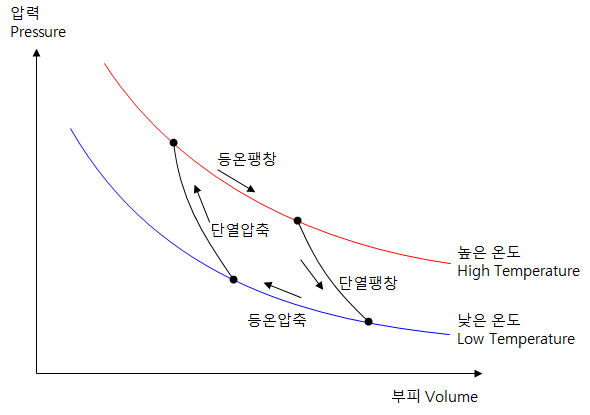 The meaning of the Carnot engine

Carnot engine is a type of ideal heat engine, and this engine does not actually exist. Even if each process is reversible, it becomes an irreversible process due to the operation's friction. Also, the process of adiabatic expansion and adiabatic compression can not actually occur. This is because there is no material that completely blocks heat from the outside.
After all, the Carnot engine's meaning is that it is the most efficient heat engine logically possible.

Efficiency of the heat engine

To convert heat energy to 100% mechanical energy, the heat must be thrown at a temperature of zero (0K). But such low temperatures are not really possible.
Even if the Carnot engine is theoretically the most efficient heat engine, it can not convert all thermal energy into mechanical energy. Therefore, the efficiency of a thermal engine is usually lower.