A method of increasing speed using the celestial body’s gravity as the spacecraft moves around a moving object is called ‘Gravity Assist Navigation.’
This navigation is also referred to as ‘swing-by’ or ‘slingshot effect.’ They all say the same thing.
When using this to increase the spacecraft’s speed, it is economical because you do not have to use the energy of the spacecraft itself.
Scientists believe that with the help of gravity, space travel is possible with little energy use. 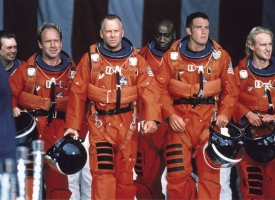 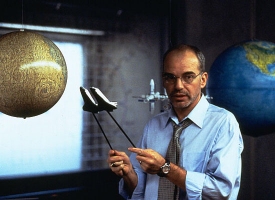 In the movie ‘Armageddon,’ the spacecraft moves around the moon to get enough speed.

If the moon stops and the spacecraft approaches constant velocity v

The spacecraft draws an elliptical orbit with the moon as the focus.
There is no change in the speed of the spacecraft leaving the moon.
If you look at this scene from a distance, it looks like a tiny spacecraft hits the moon’s surface with full elasticity and bounces back.

If the moon moves at a constant velocity V