Let's consider a circuit in which a resistor (R) - an inductor (L) - a capacitor (C) are connected in series.
Every moment, the current through the circuit is the same at every point. (It is important, so remember it.)

The inductive reactance of the inductor (the role of the resistance of the DC circuit) and the capacitive reactance of the capacitor (the role of the DC circuit's resistance) are 180 ° opposite each other in the case of voltage.
In the case of a circuit in which an inductor and a capacitor are connected in series, it is necessary to calculate the AC impedance by summing the phase vectors relation rather than simply summing.
The impedance, which acts as a resistance in the AC circuit is,

The impedance is the same as the length of the hypotenuse of the right triangle with the base and height of the reactance difference (XL - XC) and general resistance value 'R.'

This frequency is called the resonance frequency (natural frequency).
In this case, because the inductive reactance and capacitive reactance are canceled, the circuit current is only the resistance effect.

Since the inductive reactance and capacitive reactance are different depending on the frequency, the current value also varies.
In other words, using the RLC circuit, you can select only the current of the desired frequency. This method is widely used for radio and wireless communication circuits. 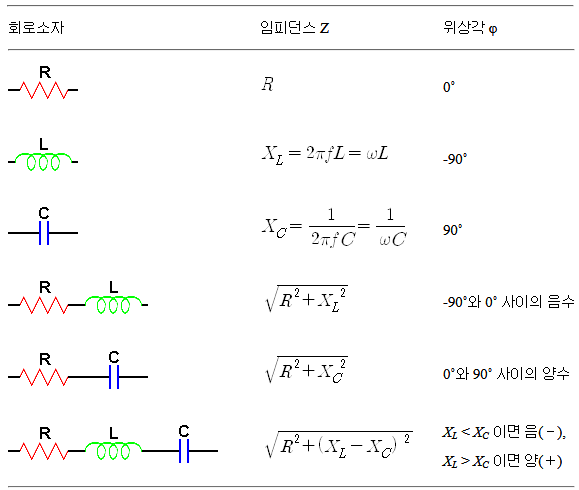