Mass before cleavage> Mass after cleavage

The mass is slightly reduced, but it produces enormous energy. This is due to Einstein's famous formula E = mc 2. Some of the energy is used to generate neutrons, and the rest is gamma rays (r-ray).

Scientists have been shocked by this fission. This is because not only does it produce enormous energy but also neutrons. Usually, when one neutron fissures, about two or three neutrons are emitted. If a newly released neutron causes nuclear fission in another nucleus, it will produce 8 to 27 neutrons again, which can cause fission in a chain. That is, a chain reaction occurs at an accelerated rate.

Does fission often occur in nature?

Atomic bombs use nuclear fission. If it is smaller than the critical mass, it will not explode. To unleash a bomb, you suddenly merge several chunks of 235 U. Then the whole mass explodes suddenly because it is above the critical mass.
(Chemistry - The Central Science) 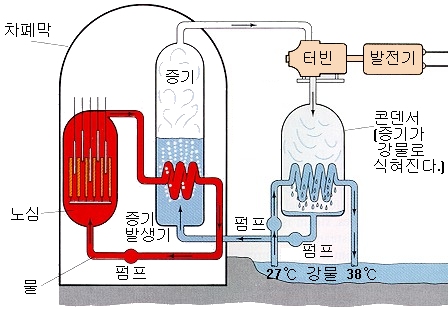