An inductor, also called a coil, choke, or reactor, is a passive two-terminal electrical component that stores electrical energy in a magnetic field when electric current flows through it.
Inductors are widely used in alternating current(AC) electronic equipment, particularly in radio equipment.

* This simulation only works while the mouse is pressed.
* This simulation is based on the actual circuit being operated(except the first circuit on the left). The power supply voltage is 3V, and the inductor is 330μH. The resistance for current regulation is 0Ω. 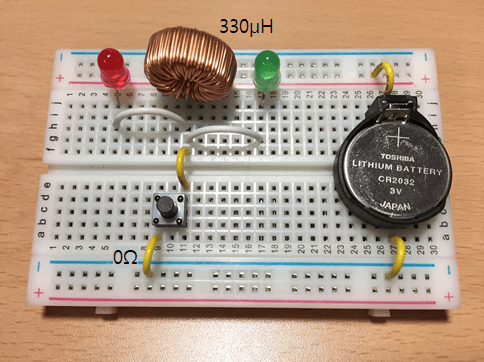 At turn on the switch moment, a current starts to flows through the inductor. It is causing a magnetic field's change. At this moment, the inductor generates back EMF(Electromotive force) against the magnetic field's change. In other words, the inductor acts like a resistance to the current change. This resistance component is called 'inductive reactance.'
If the switch is pressed steadily, there is no further change in the magnetic field, so the inductor's resistance gradually disappears, leaving only the cable's role. So the LED lights up.
In general circuits, the time intervals during which the LEDs light up are very short. Therefore, it is almost impossible to observe the process of lighting. The simulation above assumes an ideal situation.