Parts that place multiple LEDs to display numbers or hexadecimal characters are called Seven Segment Displays or FND (Flexible Numeric Displays).
It can display all numbers from 0 to 9 with only seven LEDs. So, they are widely used in elevators, rice cookers, digital wall clocks, securities companies, and vending machines. 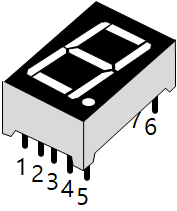 The single-digit FND has 10 pins (legs) in each of the 5 top and bottom. There are many pins, and it may look complicated, but it's only part of the eight LED legs.

FND can be divided into cathode-common and anode-common methods according to how LEDs are tied together.